A couple of days ago I tested this recipe and desperately needed something from the store. While I was getting some of the food prepared, I noticed there was a car right outside our driveway. It was a guy who looked like he was having trouble with his car. 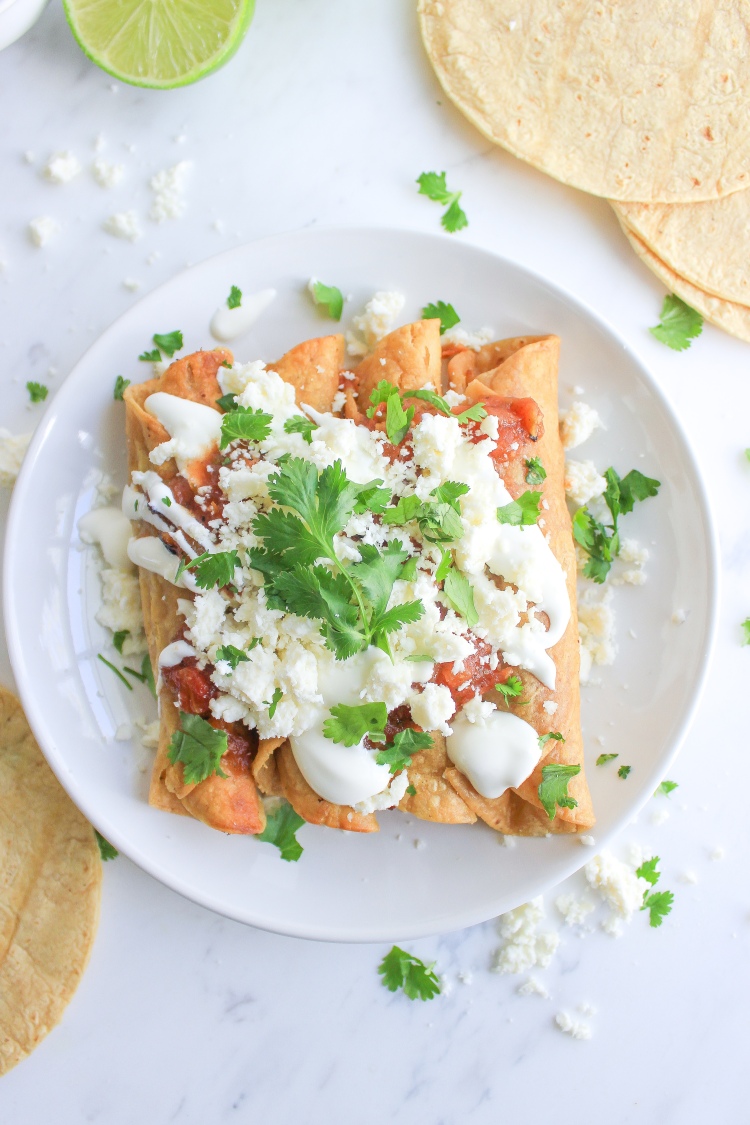 Being the nervous wreck that I am, I was too afraid to go outside because what if the guy asked me for help, or what if it was a scam? The worst case scenarios filled my brain and I panicked refusing to leave the kitchen. Clearly, I’ve been watching too many murder documentaries on Netflix.

It looked like he was trying to fix his tire, so I figured he’d be done fairly quickly. Nope. An hour and a half later, HE WAS STILL OUTSIDE MY HOUSE. I actually became upset with the man because he was delaying my free time spent testing recipes. Luckily, I came up with a solution and the guy eventually left and I was able to pick up my kids from my parents. 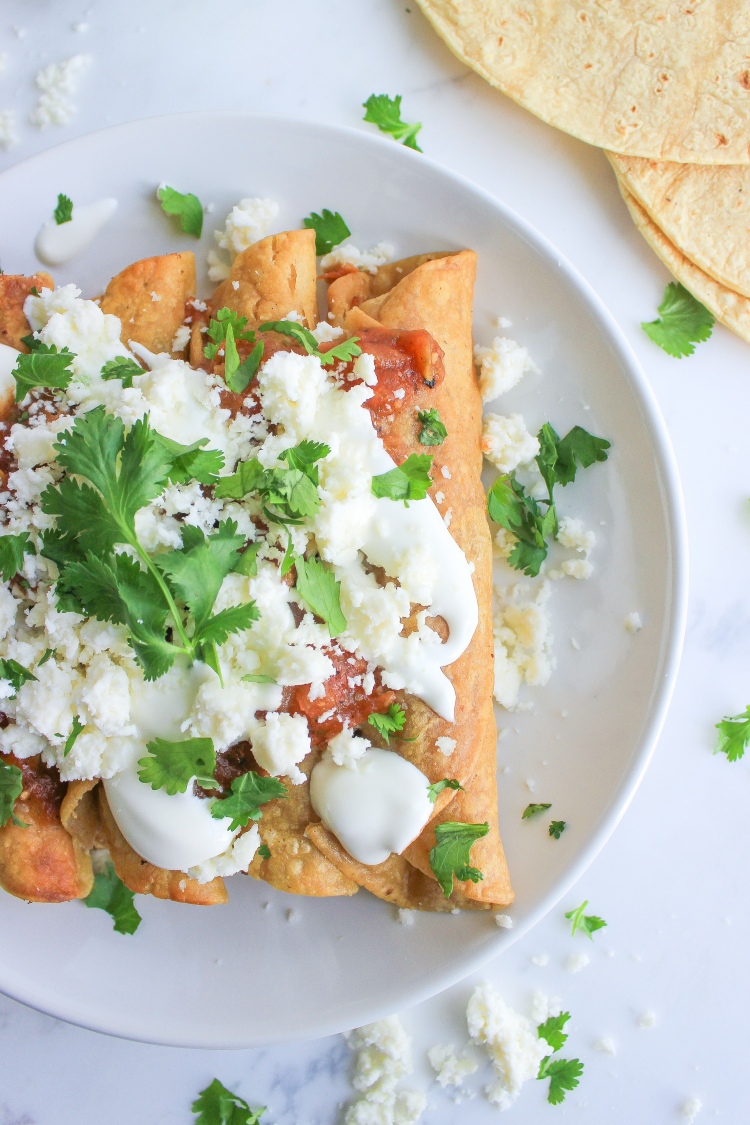 Of course, the recipe I tested that day didn’t come out quite like I had wanted it to, so I tested it out again yesterday and I’m pretty sure I’ve perfected it. I love these taquitos so much because they have so many layers of flavor. There’s just so much depth – the mashed taters, seasoned and very finely shredded chicken, queso fresco, crema and roasted salsa. This should be your go-to recipe for Cinco de Mayo!! 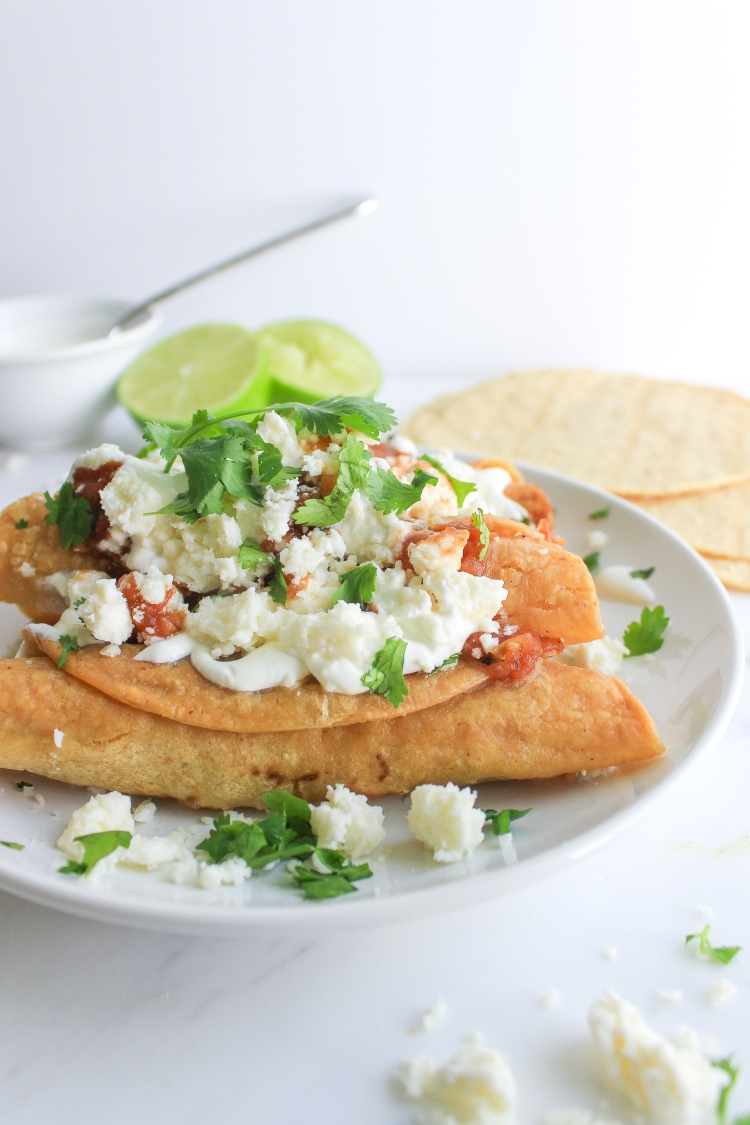 You know the drill, if you end up making it, don’t forget to tag #marinamakeseats.

Bring a medium saucepan to a boil and add the potatoes. Lower the heat slightly and continue to boil for 25-30 minutes, or until very fork tender. Drain the potatoes and place them back in the pan along with the butter, one teaspoon of salt, pepper, and 1/2 teaspoon of paprika. Using a masher or fork, mash the potatoes and set aside.

Heat a large frying pan over medium-high heat. Coat the pan with canola oil and allow it to heat up.

To assemble the taquitos, place a tablespoon of mashed potatoes on top of a corn tortilla (place it at the top to make it easier to roll) and top the potatoes with a tablespoon of shredded chicken. Roll the tortilla to form the taquito and clamp it together using a toothpick. Place the taquito in the frying pan and heat on each side for a minute or two until the taquito is golden. You can fry a few at a time and place them on a plate lined with paper towel when each one is done.

Make the lime crema by whisking the sour cream, half and half, a pinch of salt and lime juice together in a medium bowl.