Today is one of my favorite days, national taco day!! It also happens to fall on Tuesday and in our house, Taco Tuesday is a really big deal.

My husband is a basic taco guy. Give him a flour tortilla filled with beef, cheese and sour cream, and he’s good to go, while I on the other hand, crave a variety. Luckily, he loves me and is willing to try anything, so every once and a while, we try to cook totally different tacos – zucchini tacos and broccoli rabe tacos are a couple of unique ones. 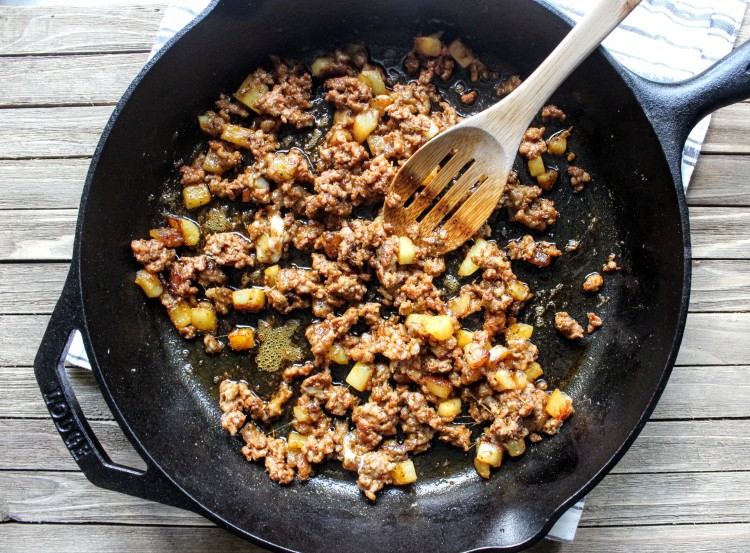 Now, this chorizo and potato taco is more of a basic taco, but its flavor is anything but. The chorizo adds just the right amount of spice, the pan fried potato adds a soft crunch and the cilantro, lime crema gives it a cool, zesty topping. I really enjoy tacos that have two main elements, which is why I love this combination of meat and potato. 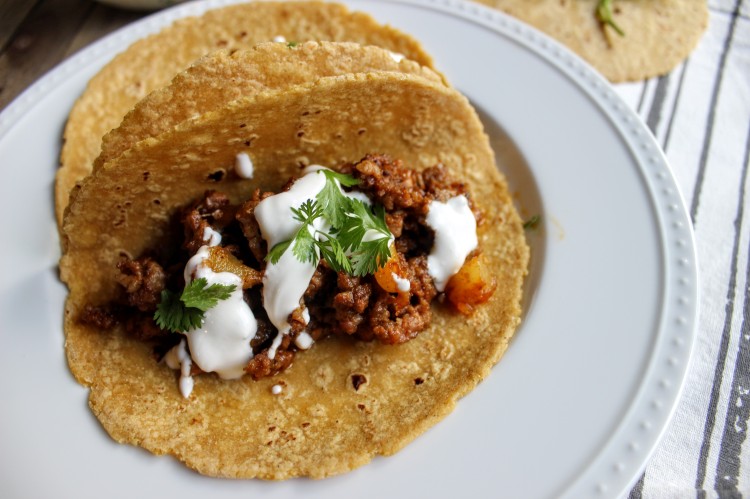 I mean, how great are tacos? Layers and layers of food so different that blend well together. And it takes one bite to taste everything.

Once our daughter is older, I’d love to set up taco bars every Taco Tuesday – it’s like my dream. We’ll have several bowls with different ingredients. It’ll be messy and fun to pick out toppings together. Of course, being the independent one she is, she’ll want to scoop up her own toppings and pile too many ingredients on her tortilla. Either way, I hope we have fun and that she loves tacos just as much as we do.

Please tell me that at this point these tacos will be a part of your Tuesday today or in the next couple of weeks? You’ll definitely thank me later. If you end up making them, comment below and don’t forget to tag your photo with #marinamakeseats!!

Fill a medium sauce pan with water and bring to a boil. In the meantime, peel the potatoes and set aside. Once the water comes to a boil, pour the tablespoon of salt into the pan and add the potatoes. Cook for about 30-35 minutes until very tender. Once the potatoes are cooked through, drain and chop them into small, bite sized pieces (I made mine very small).

While the potatoes are cooking, make the cilantro lime crema. Combine everything in a bowl until it reaches a smooth consistency.

In a large skillet, heat the canola oil on medium-high heat. Wait for the pan to heat up, about 5 minutes, and add the potatoes, stirring to coat them in the oil – make sure they are in one layer, squeeze lime and sprinkle 1 tablespoon of paprika, ½ teaspoon of salt and ¼ teaspoon of pepper. Cook the potatoes until they are crispy and golden brown on the bottom and flip, continuing to cook the other side until golden brown. Remove the potatoes from the skillet and set aside.

When the potatoes are fairly crispy, move them to one side of the pan to make room for the chorizo and lower the heat to medium. Sprinkle the chorizo with cumin, oregano and the remaining paprika and salt, cooking until brown. Mix the chorizo and potato together. Add the pepper jack to the skillet and continue stirring until the cheese has melted. Remove the pan from the heat.

Begin assembling the tacos. Place the chorizo, potato mixture in the tortilla, top with crema and sprinkle with cilantro.

One thought on “Chorizo and Potato Tacos”