Summer seemed to come to a close quickly for us, but we ended it on the sweetest note with a vacation to California! We decided to take a trip with the kids because my best friend and her family live there, and we wanted to visit and enjoy a few days on the West Coast.

We settled on Newport Beach for a couple of reasons. It’s centrally located between Los Angeles and San Diego, it’s near a ton of beaches and it’s an area my best friend likes to visit on the weekends with her kids. Newport is a super family-friendly area with lots to do and see, and it was close to everywhere we wanted to visit.

We left Newport wishing we had more time. My husband had major Disney withdrawals (more on that below!), and we just truly enjoyed the quality time we were able to have with the kids.

One thing I will note, before booking a trip to Newport, I would recommend looking into airport options. We flew into LAX and it took up about two hours of our day (arriving and departing), and there were airports that were closer to where we stayed.  I’m not sure if pricing differs, but it’s something we would definitely recommend looking into.

We ended up finding a great deal at the Hyatt Regency in Newport and really enjoyed our stay. The grounds have a pool and slide for families to enjoy, free two-hour bike rentals, and kid-friendly events. I was extremely surprised by how accommodating they were and it was nice to be among other families too. The hotel was very close to the restaurants we wanted to go to, the beach and Balboa Island.

Okay, so our days in California were pretty jam-packed, and we really wish we would have had more time to enjoy Newport and other areas, but I feel like we always end vacation wanting more time. We ended up spending time with my best friend’s family and another friend and her family, and it was so great to catch up and see them. The rest of our time was spent just the four of us.

My best friend and her family are frequent visitors of Newport Beach, so we knew we wanted to spend a beach day with them the weekend we visited. They had all of the beach gear, snacks, toys, etc., and we were so thankful because it made for a completely different experience! Brett enjoyed time in the ocean with my friend’s husband and the kids did too! Newport Beach is a great place to spend a morning/afternoon with the kiddos. We ended up entering the beach on 15th Street where there is a bathroom and showers.

Another beach I really wish we would’ve checked out was Crystal Cove State Park. It looks absolutely gorgeous and I’ve heard great things. We didn’t have time to go there though! 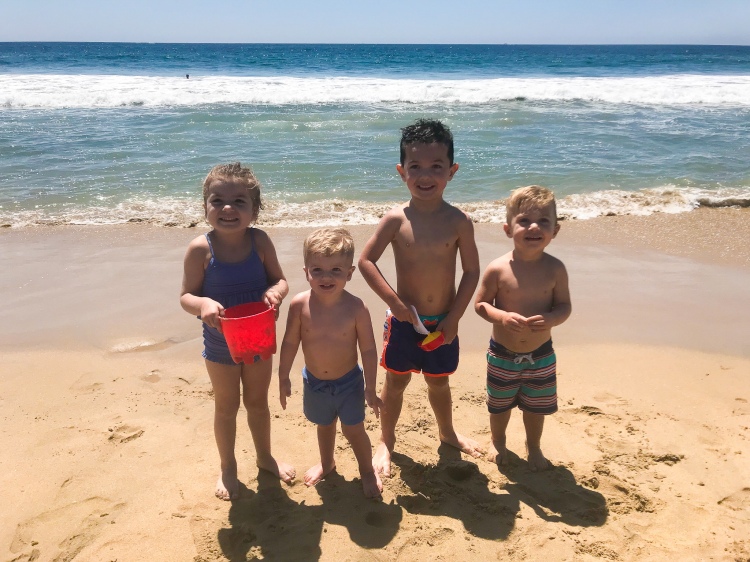 Best part about Newport is that it’s about a 30 minutes away from Disneyland. Disney was a must on our list, and I’m so glad we spent the day at the parks. We ended up doing Disneyland and California Adventure in one day. Yes, it’s was lot, but we wanted to see Pixar Pier and give the kids a chance to see some Toy Story characters. We also decided to check out both because we weren’t able go on every ride at each park with the kids being so little, so we prioritized what we wanted to see , and it worked out for us.

Disneyland is number one in my book and it was just as magical as the Magic Kingdom at Disney World. Yes, it’s smaller, but it’s still Disney. A majority of the rides and sections of the park were the same, which was made it feel the same. But, I also loved that it had it’s own unique parts about it too. We got to walk through the new Star Wars land which was SO cool! I’m not even a Star Wars fan, and I thought it was sweet.

The first time I visited Laguna Beach was years ago, and it’s so beautiful that years later, I still can’t stop dreaming about it. I wanted to make sure we visited with the kids. We walked along the cliff path along The Montage Resort (and dreamt of staying there one day – ha!), and dipped our toes in the water at Montage beach. It’s just breathtaking along the hotel and on the beach.

There are a couple of other beaches we could have visited, and a couple of hiking trails I had on my radar, but again, our trip was short, and there was only so much we could fit into our schedule. I would absolutely recommend taking a trip to Laguna if you’re staying near or around Newport Beach.

Okay… this was a tricky one. It was amazing that our hotel offered free two-hour bike rentals (our bikes had seats for the kids too!), but we should have asked for a map or suggested route on where to go and bike through Balboa Island. It would have been much more enjoyable for us. We didn’t spend much time there because we weren’t able to find any bike paths and our journey to the island was very steep and uphill. If you know where you’re going, or can ask the concierge for a clear path to get to the island and enjoy biking around it, go for it! We were able to enjoy Balboa Island’s famous chocolate covered bananas and ice cream treats, so that was fun.

One thing we had on our agenda, but didn’t end up doing was taking a day trip to San Diego and going to the San Diego Zoo. It would have been a lot of fun and I love San Diego (give me all the fish tacos!!), but we had already done a lot of driving at that point and wanted to just hang in Newport Beach. I did want to make sure it made this list thought because I think it’s something fun to do if you’re staying in Newport Beach for several days. Maybe we will make it next time??

Lido Marina Village was our eats spot during the trip. It’s a fairly new area with trendy restaurants and shops along the water.

We had our first meal at Circle Hook and enjoyed the Lobster Roll, Fish & Chips and my husband got a crab cake sandwich. It was pretty good. Not my favorite meal of the trip, but still a cool spot to check out.

Another place we checked out was Zinque. It’s a Mediterranean restaurant with great plates to share.

The last spot worth noting at Lido Marina Village is Malibu Farm. We went for brunch and it was awesome! The atmosphere and organic dishes are delicious. We also really enjoyed their iced coffee and ice cream.

One morning we got donuts from Sidecar Donuts – holy moly! Some of the best donuts I’ve ever had. You have to stop here if you’re in Newport Beach.

My favorite meal of the trip was at Bear Flag Fish Co. The fish tacos and guacamole were SO good!! It was exactly what I wanted to feast on while in SoCal. 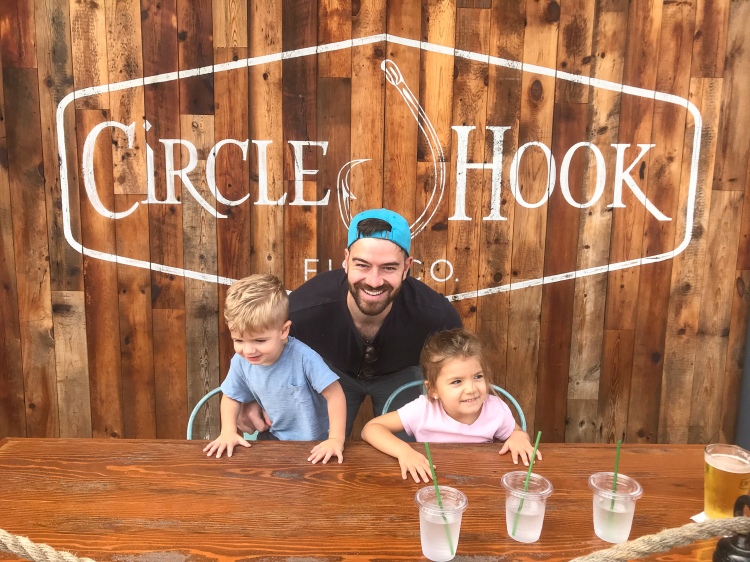 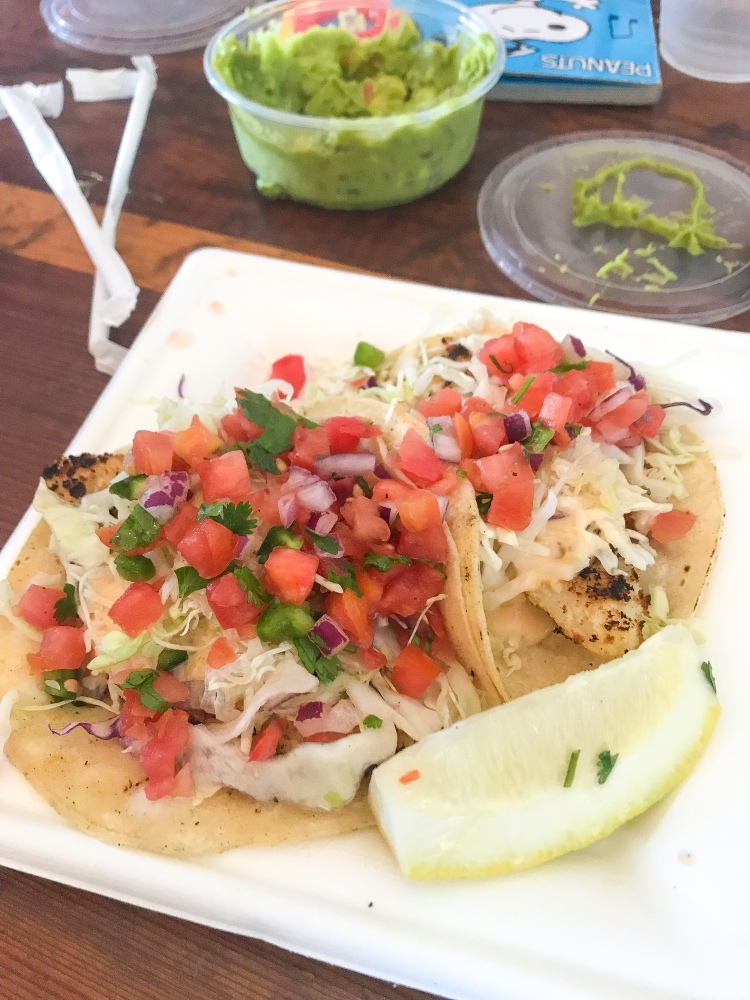 That about sums up our trip! After reading this, I’m sure it’s clear that we all wanted more time in California to soak up those beautiful sunsets, enjoy the breeze from the ocean and eat all of the fish tacos, but I’m hoping we can go back and visit the places we wish we would have seen!