Last week I went to Chicago’s fairly new Revival Food Hall with my husband and brother-in-law. I’ve been twice now, and have enjoyed both experiences. They’ve definitely got a good thing going because every time I’ve been it’s extremely crowded! It’s basically a cafeteria on steroids, except nothing about Revival Food Hall will remind you of a cafeteria. Their vendors are unique to Chicago and the food each vendor serves is authentic and delicious. The atmosphere is another aspect I enjoy, it’s really trendy and clean. If you’re in the area, or work in the city, I’d definitely recommend stopping by, just maybe before noon and after 1 p.m. to avoid the crowds.

Now to the important stuff – the food. Last week, I devoured a vegetarian sandwich from one of their vendors, Danke, a sandwich shop. They use homemade baguette bread for their sandwiches and this specific one included veggies and hummus, but what stood out to me most about the sandwich were the pickled pears. It was my first time trying them and every time I didn’t get a bite of one, I immediately started scoping out my sandwich to ensure my next bite had pear in it. They were the perfect combo of tangy and sweet.  I’m not even a fan of pears, but they were so good I couldn’t get enough.

They were so good, I was inspired to create my own sandwich with pickled pears as the star of the show. Side note: that’s what I love about the city, it’s so full of inspiration and is always satisfying my foodie heart.

‘Tis the season to make a grilled cheese, so I decided to start there with some brie and gruyere. I knew I wanted the pears to be the surprise tang/sweetness of the sandwich, but also wanted to pair them with something salty, so I also added pan-fried pancetta. YESSSSSSSSSSSS. 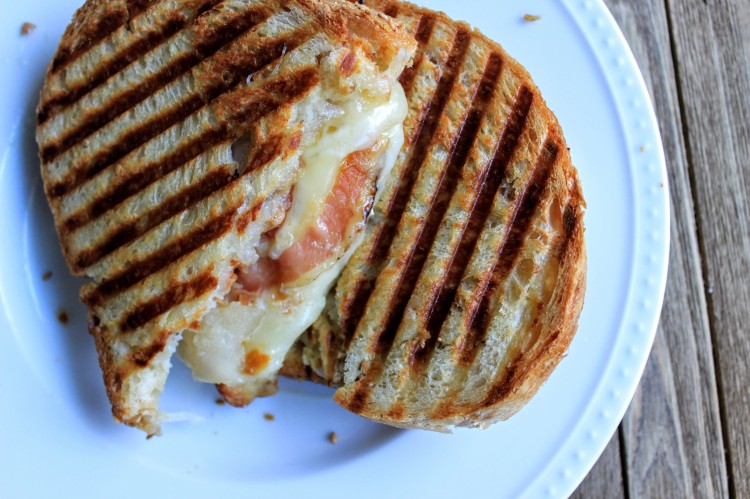 To pickle the pears, I followed a recipe from BBC Good Food and adapted it. It was very easy to do, so I’d recommend taking the extra step in pickling the pears instead of putting them on the sandwich as is.

I hope this pickled pear grilled cheese finds its way into your life in the next couple of weeks. Make it with a soup, or have it for lunch. Or, make it for breakfast, lunch and dinner. You’re bound to be happy all day, and if you do, don’t forget to tag your photo with #marinamakeseats!!

Start by making the pickled pears. Heat a medium pot over medium-high heat and add zest and juice of lemon, vinegar, sugar, cloves, peppercorns, allspice berries and cinnamon stick and cook until sugar completely dissolves. Once sugar dissolves, add pears and bring liquid to a simmer. Continue cooking for 15 minutes until pears are tender. Remove pears from the pot and set aside. Continue boiling liquid for another 15 minutes until thickened.  Pour the liquid over the pears and set aside to cool. Once the pears are cooled, cut them into thin slices.

While the pears are cooking, set a frying pan to medium-high heat and cook pancetta on both sides until crisp and brown. Once pancetta is crisp, set aside on a plate lined with paper towel.

Next, brush the outer sides of the bread with olive oil to ensure the bread gets crisp when you cook it. To assemble, place slices of gruyere, pieces of brie, and then top with pancetta and pickled pear. Make sure you have a good amount of pear and pancetta because you want both of these flavors to come through in each bite.

Grill the sandwiches using the same frying pan over medium-high heat, or grill with a Panini maker. Grill each side until the bread is golden brown and crunchy.