When I went to Greece with my family (over 10 years ago), we spent a couple of weeks in my aunt’s hometown, Astros. It’s such a beautiful place to visit. It’s near the Argolic Gulf, so it’s right on the water, and filled with houses and a lot of locals who make delicious food. One of the foods we ate quite frequently were the chicken gyros from a place down the street from our hotel. The gyro pita was filled with so many great Greek flavors – I couldn’t get enough. I can’t wait to go back someday and have more! 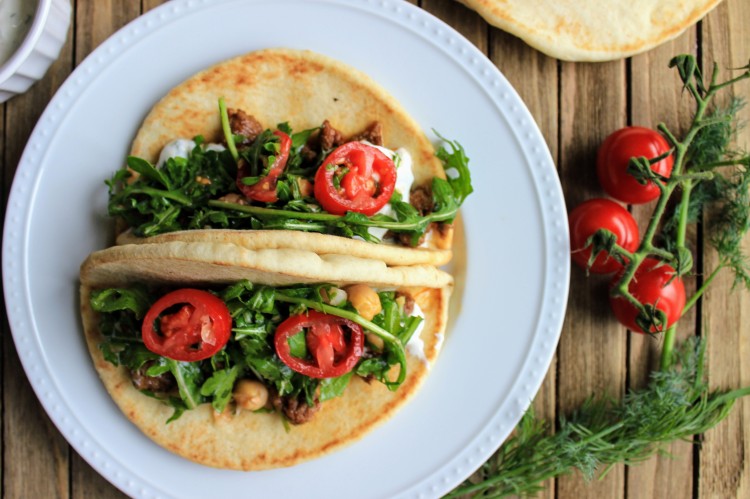 Speaking of pitas – is anyone else obsessed with the pitas they serve with gyro meat? They’re great toasted with hummus and veggies, tuna, or spinach and artichoke dip, and because they’re shaped the same as a tortilla, I’ve always dreamed about using them as taco shells. I recently decided to give it a try. 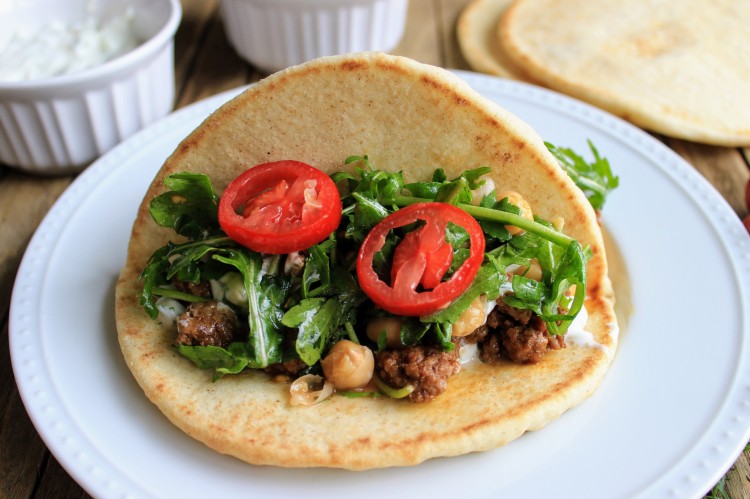 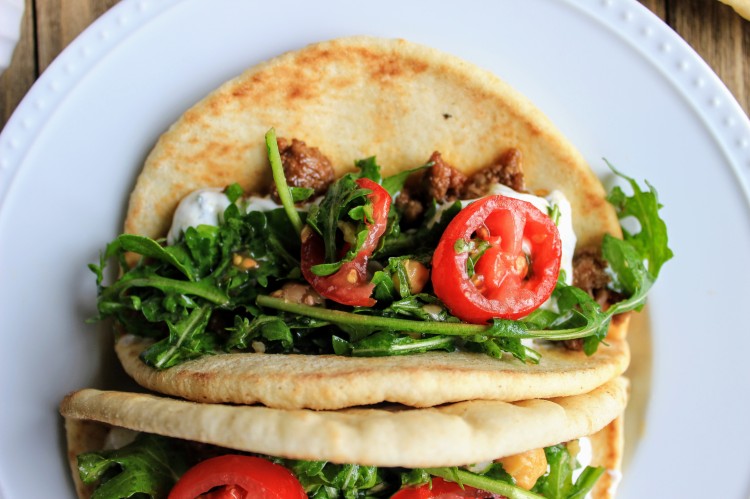 Our family is always up to try different tacos because we have them about once a week (holla for Taco Tuesday!), and because I’m Greek, a Mediterranean taco sounded fabulous to me. Like normal married couples do, my husband and I discussed what would make the perfect toppings for this Med taco while laying in bed. I wanted to find something that provided a good texture and combination of  flavors. Of course, my half-Greek mind automatically wanted to include tzatziki sauce because lamb and tzatziki sauce equals heaven, but I also wanted a substitute for lettuce. That’s when arugula popped into my head! Then shortly after, the marriage of arugula, tomato, and chick peas sounded perfect. 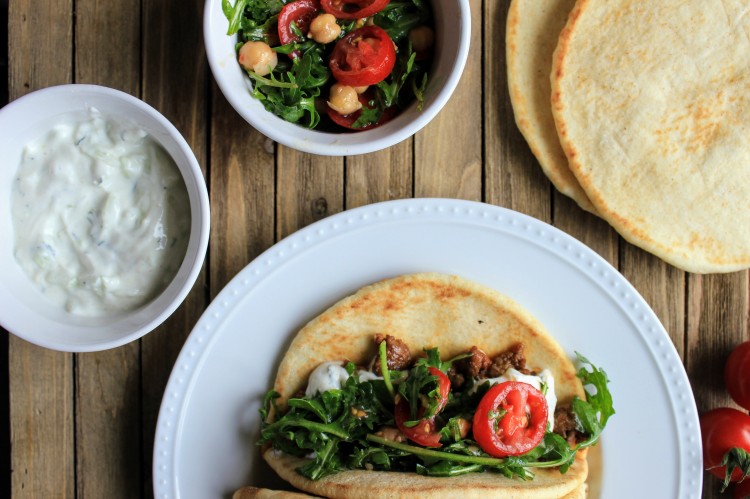 There you have it, my Mediterranean tacos. Should I end this post by connecting how taco comes from a Greek word? Anyone else get the My Big Fat Greek Wedding reference?

Preheat the oven to 350 degrees (or use your toaster oven to heat the pitas).

Set a medium frying pan or skillet over medium-high heat. Add the ground lamb, breaking it up with a spoon or spatula, and sprinkle with cumin, paprika, teaspoon of salt and 1/2 teaspoon of pepper. Mix to combine and cook the lamb until it’s browned and cooked through.

While the meat is cooking, assemble the arugula salad by mixing the arugula, tomatoes and chick peas in a small bowl. Add the lemon juice, red wine vinegar, olive oil and a couple of pinches of salt. Mix to combine and set aside.

Next, make the Tzatziki sauce by combining the yogurt, lemon juice, grated cucumber, cumin and salt. Set aside in the fridge until it’s ready to use.

When everything is ready, place the pitas on a baking sheet and cook them in the oven for about 3-5 minutes, until heated through. You still want them to be able to bend, so don’t cook them for too long.

To assemble the tacos, add a tablespoon of tzatziki sauce to the bottom of the pita, then layer it with ground lamb and top it with more tzatziki. Last but not least, add the arugula salad.